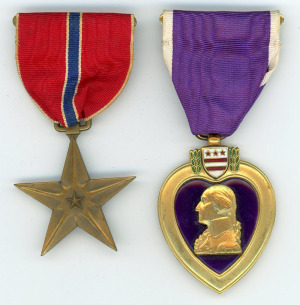 Chester B. Wolfe, age 100, of Waynesburg, Kentucky, passed away on Sunday, June 26, 2022, at VA Medical Center in Lexington, Kentucky. Born Saturday, April 8, 1922, in Georgetown, Kentucky, he was the son of the late Varney George & Lyda Garwood Wolfe.  Chester was the widower of the late Mary Maybrier Wolfe, his wife of 72 years. He was a WWII Veteran, serving in the United States Army, where he received the Purple Heart and two Bronze Stars. Chester was an avid horse racing fan, loved playing cards, and enjoyed fishing.

A Graveside Service, with Full Military Honors for Chester and his late son, Stanley, will be held 1:30PM Wednesday, July 6, 2022, at Camp Nelson National Cemetery.  Burial will follow the service.

To send flowers to the family or plant a tree in memory of Chester B. Wolfe, please visit our floral store.

A Memorial Tree was planted for Chester B.

Join in honoring their life - plant a memorial tree